Upload a photo from your seat
Share your view!

Rate your seats
How were your seats? Fans want to know!
Get a ReminderAfter your event
Venues
»
Dignity Health Sports Park
»
Seating

Home Sideline - For most football games the home team sideline is in front of Section 131, Section 132 and Section 133

Visitor Sideline - The visiting team sideline is in front of Section 110, Section 111 and Section 112

Galaxy Bench - The Galaxy sideline is in front of Section 110

Roughly half of all seats at Dignity Health Sports Park offer some type of shade or cover. Below is a sample of seats that are at least partially covered or shaded at different times of the day. To search for tickets or to find out if your seats are protected from the sun or rain, follow the link for the seat finder.

Best Seats for Great Views of the Field 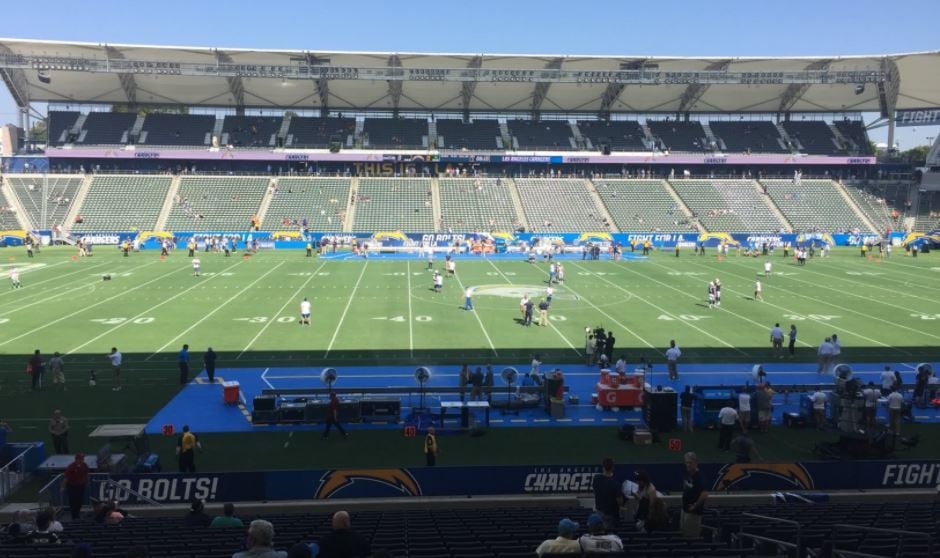 Beginning with the 2017 season, the Chargers will call the Health Sports Park (formerly StubHub Center) their home for a few seasons. The stadium is a stark contrast to Qualcomm Stadium, the Chargers' previous home in San Diego.

While Qualcomm Stadium handled up to 70,000 guests for football games, the StubHub Center only holds 27,000 fans. Because of its dual-purpose as a football and baseball venue, Qualcomm Stadium offered fans some of the worst sitelines in the NFL. The StubHub Center is also a dual-purpose venue - catering to the LA Galaxy of the MLS - but its overall intimacy leads to better views for a higher-proportion of fans.

One of the biggest issues with Qualcomm Stadium's lower level is that fans are pushed back too far from the field - and sit too low to the ground. Unfortunately, this will also be an issue at the Dignity Sports Park. Because soccer fields are roughly 20 yards wider than NFL fields, there will be a lot of extra space between the players on the sidelines and the first row of seating.

Recommended Seats in the Lower Level

Because the awe-factor of sitting the first few rows is greatly diminished, we recommend sitting in rows J-Z in the 100 level to maximize your view. These seats will give you 10+ rows of extra elevation, which makes it easier to see action on both sides of the field. As an added bonus, most of these seats are covered which can keep you cool or dry when the weather plays its tricks.

While most NFL venues have three or four decks of seating, Dignity Health Sports Park has just two decks of seating - and the second deck only wraps around one side of the field. The views from this "upper" level are similar to what you would find in club seating at other football venues. The seats are well-elevated and hang slightly over the lower bowl. This brings you closer to the field and gives you one of the best views in the NFL. The front rows in sections 230-234 are the best of the best, but we recommend just about any row in these sections for an outstanding view.

Shaded Views From the South Endzone

If sideline seating is a little out of your price range, you'll find cheaper Chargers tickets in the endzone sections. When looking at seats here, first consider sections in the South endzone (101-103, 140-142). The views of the field will be similar to what you get in the North endzone, but the sun won't be shining in your eyes, and you'll have a head-on look at the primary videoboard.

Overall, it's going to be tough to find a bad view at a stadium that's even smaller than every Major League ballpark. You'll never be more than 50 rows from the field, and you'll never have to walk more than 25 rows to your seats (and if you are walking that far, it's because you're sitting in the front row). Don't be scared off by seats in one of the upper rows in any sideline section. They will be cheaper than the lower rows, on average, and the view upgrade will be negligible.

T!ckets™
The best way to buy
tickets - on your phone!

RateYourSeats.com is not affiliated with Major League Baseball, the NBA, the NFL, the NHL, the NCAA or any of its members.